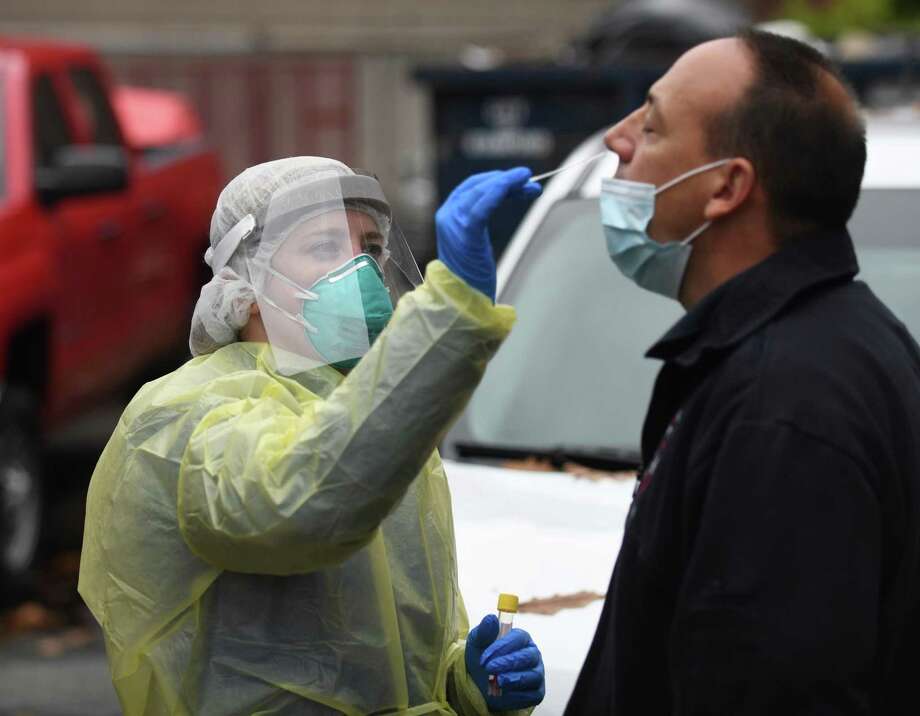 A nurse administers a COVID-19 test in Stamford, Conn., on Thursday. That same day, the creator of Guilford-based Homodeus tweeted a teaser photo of home-based test kits the company plans to sell if approved by the Food & Drug Administration.

It was a small thing to ask, the request for volunteers to head to Guilford to have their nostrils swabbed as a screen for COVID-19.

A small request, but those tests are part of a swift and powerful current in Connecticut, as companies and labs dive deeper into ideas to contain and defeat coronavirus.

Homodeus issued the call for volunteers last week as part of its effort to develop home test kits to detect the COVID-19 virus. That’s a potentially massive market depending on the effectiveness of vaccines from Pfizer, Pharmaceuticals, Sanofi and other biotech companies.

The start-up emerged from the 4Catalyzer accelerator — in Guilford, with offices in New York and Palo Alto — run by Jonathan Rothberg, Connecticut’s best-known entrepreneur in the life sciences sector, renowned for his work in gene sequencing.

In offering the promise of Homodeus kits joining Q-tips and Band-Aids among bathroom staples, the company is only one of about two dozen across Connecticut to tackle COVID-19 over the past several months.

Pfizer has generated global headlines since Monday, when it revealed its vaccine candidate in the hands of its massive Groton lab exceeded expectations in early results from clinical trials. AstraZeneca, Moderna, Sanofi and others hope to win Food & Drug Administration approval or emergency certification as well.

Paris-based Sanofi has a major vaccine lab in Meriden working on COVID-19, using the technology developed there for a revolutionary flu vaccine, Flublok. Connecticut has other companies and labs pushing ahead with their own development — with a few persuading investors to front them significant piles of cash to sustain those efforts.
“There’s a fair amount,” said Dawn Hocevar, CEO of the BioCT trade group of life sciences industry employers, who has participated in the Homodeus tests herself. “When COVID hit, they took whatever area they were going for and switched it to COVID.”

That has been the case nationally, with more than 300 trials under way in the United States or otherwise recruiting volunteers for varying solutions that would require FDA approval, according to a global tracker maintained by Cytel.

Another Rothberg startup called AI Therapeutics is in trials of a drug to reduce the “viral load” in COVID-19 patients.

And other efforts are percolating at Yale University, the University of Connecticut and other labs in the state. After a consortium of venture investors created a “Fast Grant for COVID-19” program that awarded cash in the space of days, a quartet of Yale researchers won support for their projects.

Kleo Pharmaceuticals, a New Haven startup which has been developing a treatment for the bone marrow cancer multiple myeloma, is on the cusp of clinical trials early next year for a COVID-19 treatment, with more to follow.

After raising $21 million two years ago, Kleo is now pushing ahead for additional backing as it steams toward trials of both drug candidates, according to CEO Doug Manion, who spoke in September during an online conference sponsored by BioCT.

The company’s technology is being harnessed to mimic the antibodies that COVID-19 patients have generated naturally in their fight against the virus, and produce synthetic equivalents at a vastly greater scale than can be produced by extracting blood plasma from patients. In July, the Bill & Melinda Gates Foundation funneled $5 million to Kleo in support of that work.

Manion said during the BioCT forum that the Kleo drug under development will have both a therapeutic and a “vaccine-like” effect, in his words, against COVID-19.

“It creates kind of a ‘memory’ effect [in] our immune system,” he said.

CaroGen is working on a vaccine as well, at UConn Health in Farmington, in collaboration with scientists there and at Yale.

“Pfizer, Moderna [and] AstraZeneca … are moving very fast,” said CaroGen CEO Bijan Almassian, during the BioCT forum. “We have no intention of catching them, because we can’t. … We will try to see if we can improve on what they have developed.”

The pandemic forced NanoViricides Inc. to postpone clinical trials for a shingles treatment it has been developing, but it swiftly got to work on a COVID-19 treatment which it envisions pairing with the drug remdesivir, which the FDA has allowed on an emergency basis to treat COVID-19.

The Shelton company has raised nearly $30 million in new funding this year, and has signaled its intent to seek as much as $50 million more to support future trials.

As Pfizer reminded the world this week, clinical trials must demonstrate safety of any treatment as well as effectiveness, and some fall by the wayside on the path to the FDA. BioSig Technologies, a Westport medical device maker, acquired a candidate treatment last spring but ended clinical trials in late October after data suggested it was “unlikely that the trial would meet its primary safety endpoints,” in its words.

But more are on the way in Connecticut, including some existing therapeutics or candidates that are being put before FDA anew to add COVID-19 treatment to their list of acceptable medical uses. New Haven’s BioXcel Therapeutics is seeking one such new use, to treat delirium in patients.

In Woodbridge, the founder of Vistara Bioscience published a paper in October on how existing, FDA-approved drugs could be re-purposed as COVID-19 therapies. And Stamford-based Sema4 was an early convert to the COVID-19 testing arena, drawing plaudits from U.S. Sen. Chris Murphy among others for its impact in helping Connecticut contain the outbreak.

The Homodeus test is designed to provide a result within an hour. An external spokesperson for Homodeus responded to a query to say the company plans for its kits to be manufactured in the United States under the Detect brand name — she did not indicate where — with health care centers to get the first crack at purchasing them, and distribution expanding in time to home use.

Rothberg pivoted Homodeus to the COVID-19 problem last March, confirming at the time on Twitter the original vision for Homodeus to search for genetic clues that life on Earth be traced to particles arriving from outer space.

On Twitter again Thursday, Rothberg teased photos of the test kit’s packaging along with a plea for engineers as the company hires — and an accompanying statement on the urgency of Homodeus work.

“Test before you see someone vulnerable,” Rothberg tweeted. “Test before Thanksgiving dinner. Test when you may have been exposed. Test at your school, at work, at a mini clinic, at-home. Test.”